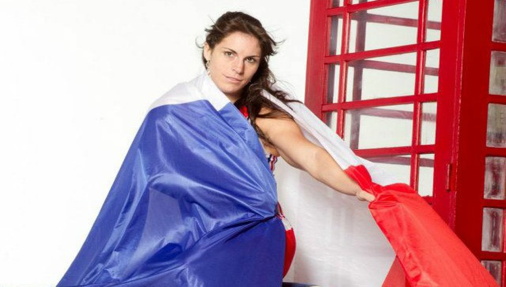 Audrey, you are world champion 2007 in Baku (AZE), did you think you could reach this level during your career?
"It has been a long time since a French wrestler won the world title (Anna Gomis in 1999). There was a lot of pressure on me but I was determined. I defeat the Ukrainian for the first time in many matches. That win gave me the confident I needed so much. During the final against the German, I gave my best. Nothing and nobody could have stopped me this day, I was my big day."

What were you thinking at this moment ?
"It was amazing! It felt so great to hear to the Marseillaise. I was sharing this moment with my family, the girls (Vanessa Boubryem, Anne-Catherine Deluntsch, Anna Gomis), and the French team. I have phoned my parents so they could hear the anthem as well. My phone was ringing in pocket while I was standing on the highest step of the podium.
Ghani Yalouz was crying, he was an example to me. I also had a huge thought for my personal coach, Nodar Bokhashvili who was working so hard. If I’m world champion this day, he has a lot of influence. Finally, he was renowned for his talent."

Wrestling is an individual sport, however you often talk about the French team. What was the atmosphere like?
"With the girls, we were struggling together. This gold medal, it is also a gift for her. They were crying and I felt like they were also world champions. They definitely were in my heart. I wish everyone to have the opportunity to live this kind of emotions."

How was your return to France?
"Unbelievable! Everybody was here: family, friends, French wrestling family. They were waiting for me at the airport with some presents and champagne. It was a bit weird. I am not use to this. I was like one of the wonder of the world (in my view or the one of my friends). I was proud, proud to share this medal with the people I love."

You are still making good things for wrestling, years after the end of your career…
"Yes, I love to give hope to young kids : put my medal round their necks and look at them smiling. I am lucky to be, in a way, a model for those kids. Life is like a wrestling match, sometimes you win, sometimes not. That’s the way it’s works. I hope to see them win and be proud of themselves."

Paris has been designated host city of the 2017 world wrestling championships, is it a good thing ?
"Of course it is! French people are going to get into wrestling and they are going to understand how important is this sport in the world. Wrestling will be everywhere during the week (Tv, radios, papers…). I wish my best to the organization team. I know that it’s going to be a great competition. Let’s show the world what we can do!"

Are you also referring to the IOC decision of the host city of the 2024 Olympic Games? (13th of September)
"That’s right. Succeed in the championships organization will prove that we can hold major sport events. I do not think that people really imagine how does it feel to host the OG. It is something that a country has to live, at least once."